On May 25th the promotion agency St-Promotions realized a promotional campaign for the Swedish furniture store IKEA, benefiting a good cause. During the campaign there was lots more to see than just the usual:

Dressed in a dashing Bavarian Dirndl the promotional consultants were working in the areas Altona and Bergedorf – both locations only in walking distance from an IKEA store. In the framework of this campaign, the consultants handed out the so called Majblomma (Mayflower) to passers-by whilst pointing out the good cause of the event.

The Mayflower is a small flower made out of paper and is traditionally sold every year in Sweden, during the months April and May, in order to call attention to the subject of child poverty. All proceeds are donated to the charity afterwards, helping children worldwide. 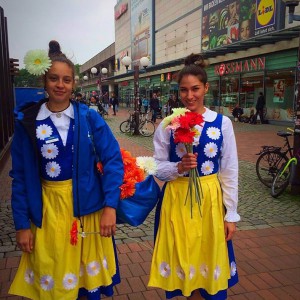 All in all the promotional campaign was a great success. Not only did the consultants reach out to tons of passers-by and were therefore able to spread the word for the good cause, they also had a blast doing it and were extremely motivated throughout the whole campaign.